While I'm not in the same camp as deadlift Nazis who assert that the DL is a must do, I do think it can be productive if performed well. Problem is that the default form (form resorted to at load /fatigue limits), for both sumo and conventional DL's, places the lumbar spine in suicidal position. Such vulnerability disinclines me from doing it or recommending it without modification. With modification, however, the dead inclines much safer form.

The deadlift, performed typically, is often reduced to an improvisation with the spine looking like a parachute attached to a barbell. This round back position is horrible for the discs and spine. This is often resultant of the ass rising before the shoulders. Consequently, the discs get squashed between the vertebrae and the ligaments around the spine are stretched to weakened positions. Repeat this at typical workout frequency and you're an orthopedic surgeon's wet dream!

Question is how to modify the deadlift so the shoulders are always higher than the ass. Well, I've had success with preloading (resistance imposed on certain joints before/during a lift to cue desired position) variations and inclining the bar to be raked up the legs. The following pictures and explanations illustrate various pre-loading/raking methods.

Rolling bar pads up the legs 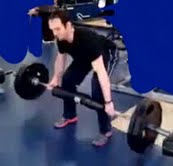 This is a method meant to incline raking the bar forcefully up the thighs. The intention encouraged here is to squash and roll the bar pads from the lower shins to the top of the thighs. By initiating forceful bar pressure against the lower shins all the way up the leg, keeping the butt as low as possible is strongly inclined.

Downward/forward preloading of the torso

As depicted in the photo, a tube is pulling the torso down and forward before and while performing the lift. Such a pull mandates keeping the butt low and weight in the heels!

Upward/forward preloading of the torso


This preloading technique also provides some upward assistance, but because it's also pulling you forward, keeping the butt down and chest high is inclined.   Furthermore an upright torso is further encouraged in order to maximize the upward assistance of the tube.

As depicted in the photos, a kettlebell is attached under the lifter's butt via dip-belt.  This is actually a punishment for lifting the ass too soon!  The moment the kettlebell is engaged, torso elevation quickly catches up with the hips!


Upward forward assistance of the bar

This is actually a technique that both preloads and inclines raking.  To initiate the lift, the bar is rolled toward the shins against the oppositional tube-tension preloading the raking motion.  In order to rake hard, the butt must remain sufficiently below the shoulders throughout the range of motion.


While there are many viable alternatives to the deadlift that have safer default form, the deadlift is an exercise most strength enthusiasts engage in. As such, having methods to incline safer DL form can mean the difference between productive and injurious training.   Various preloading/raking methods often incline the low-butt position critical to safer DL's.