How to jump higher 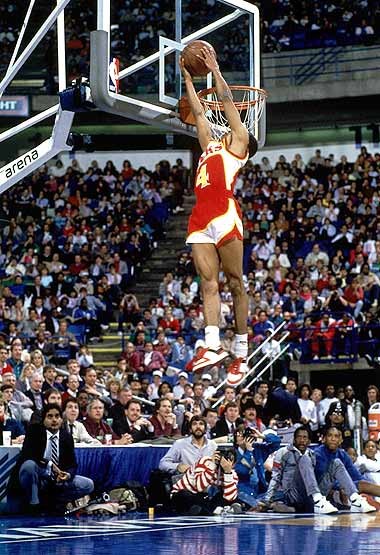 Who needs to jump higher? ....answer is most people; any person or athlete who benefits from reaching higher (basketball/reaching a child's balloon) and/or bounding higher (Ballet/hopping over fences) should want a higher vertical.

Various training strategies increase jump height and include strength-training, skill-training, increasing upper-body-mass or a combination therein.   Strength training is used to gain the surplus of force beyond body-weight necessary to launch the body upward.   Skill training is used to reach that force before the legs straighten.  Increasing upper body-mass is often necessary to adequately pull the lower-body-mass upward.

The ability to jump higher requires increased strength when muscular force doesn't exceed body-weight sufficiently.   Think about it...how high could you throw 10lbs if you can't lift more than 11lbs?....not far.  On the other hand 10lbs can be thrown quite high if 100lbs of force is propelling it!   So if you weigh 200lbs and only squat 250, increasing your squat to 300 will increase your vertical!

Without too much detail, the best exercises for challenging ever greater muscular force allow for retention of durable form under peak force output.  Though squats were mentioned above, they're not the best jump-strength exercise for everyone.  Split-squats (especially bulgarian!), step-ups, and even leg-presses supplemented with core-work are often better alternatives for some body-types.

As far as loading goes, resistance, reps, and frequency should allow for observable increases in force output through the training period.  Resistance is usually high enough to allow sufficient tension (can't crush a can against a curtain) but not impair inter-set/inter-workout recovery. Reps and frequency should also allow for recovery and progression of force-output.

If your leg strength is more than sufficient, however, effort might be best spent practicing jumps to up your vertical.   At certain strength levels, increases beyond don’t contribute to the ability to jump higher.  This lack of increased height is because the feet are likely off ground before increased force is reached.

Imagine trying to snap your finger without the thumb; wouldn't be much of a snap would it?   That's because, while the muscles that "smack" your finger against your palm possess enough force to make a "smack", they need resistance from the thumb to allow enough time for force to build!

Similar to louder finger-snapping taking longer for enough pressure against the thumb to build, 700lbs of jump-force takes longer to produce than 500; likely much longer than the time it takes to leave the ground.

To practice jumping, however, is synonymous with practicing landing.   In fact, immediate increases in vertical are often redeemed once proper landing is learned; which, in such cases, suggests vertical might be limited by neuro-emotional apprehension rather than lack of jump-force/power.

So, while keeping proper landing in mind, how does one train the ability to jump higher? Well if jumping is rarely done, simply jumping more regularly will result in gains in jump-height.

In order to prime the muscles for greater jump-force during jump-training, preloading techniques are often necessary.  Such techniques however, should only be employed after physical readiness is established.

Once physically ready, methods should be employed from lesser to greater intensity.

An example progression could initiate with heavy workouts of squat-type motions shortly preceding jump-training.  When gains cease, move on to depth-jumps from progressively greater heights.   If even more intensity can be helpful, progressive depth-jumps with 1-leg can be implemented.

The role upper-body-mass plays in allowing one to jump higher is in allowing enough momentum to pull a heavier lower-body off the ground.  Why is the lower-body heavier? ......because of the greater muscle-density forged by strength-training!

Though more-muscular legs can have greater jump-force potential, they're heavier and create a situation like jumping with ankle weights on!

A heavier upper body, however, can allow for enough momentum to "pull" the lower-body up if the upper-mass is accelerated sufficiently.

Imagine using an arrow tied to a message-bottle that you want to shoot across a river; too light of an arrow will fail to lift the bottle let alone deliver it.  Same goes for jumping; a puny upper-body won't lift heavy legs off the ground!

Methods for increasing upper-body mass to jump higher aren't much different than other mass-building methods.   Focus on progressing volume while intensity and nutrition are sufficient will deliver.

Additional care, however, should be taken to maintain adequate flexibility so arm-swing mobility isn't compromised.   So make sure to train through a functional range of motion.