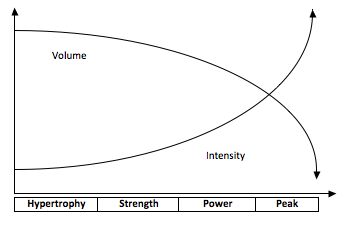 Periodization is generically defined as the planning of varying training periods often accompanied by suggested cycle orders (i.e. hypertrophy followed by strength etc.) to optimize progress. What seems to be left up to the reader's assumption is the reasons why such variation yields better training results. Though the reasons behind planned change vary, there are variables that govern how such change is designed. Among the considerations for planning workouts are diet, weight class, stimulus-refreshment, adaptation half-lives, and adaptation conflict.

Regardless of the goals of a given training period, all essential nutrient needs must be met. Aside from essential nutrition, however, calories must be compatible with training goals. A training variation model that calls for a high volume hypertrophy block with a hypo-caloric diet is faulty. Conversely, coinciding high-force/low-volume training with a hypo-caloric diet to offset the negative effects of cortisol on fast-twitch muscle (side-note: fast twitch muscle is more vulnerable to cortisol-induced atrophy) might characterize a thoughtful planning.

When training people who want/need to remain under a certain body-weight like fighters, gymnasts, and dancers; careful attention must be paid to gaining strength while maintaining/shedding body-weight. High-force/low-volume training is the best means by which to facilitate a high strength/size gain ratio. Variety in stimulus, however, is important to progress and recovery. Therefore, variety must be integrated with as little resort to hypertrophy training as possible. Such "non-hypertrophy" variation might come in the form of load, exercise-variety, and/or strength-curve variations.

Exercise, like many other stimuli, can result in reduced responsiveness from the body/organism if presented too frequently. Utilizing the same exercises, weights, reps, etc. too long/frequently will disenthuse stimulus-response in a way similar to listening to a song too redundantly. Much like music, however, training parameters can be revisited with enthusiasm if a temporary break from the stimulus is taken. With training, such a sabbatical might take the form of lighter-loads, different exercises, different strength curves, as well as many other variations. Note, however, that the intent is to revisit training periods with increased enthusiasm/sensitivity to progress beyond the previous level of performance.

The various adaptations made in response to training each have a different half-life (life-span) that dictates the training frequency necessary for adaptation maintenance/improvement. Such varying frequency needs can incline the intent to elicit different adaptations in close time periods. Unfortunately recovery and risk of stimulus conflict (discussed next), often render training different adaptations in the-same/close time periods undesirable. Among the goals of periodization are to plan training schedules so desired training adaptations endure/improve as much as possible. An example of such scheduling is emphasizing structural/sarcomeric-hypertrophy before a long sabbatical as sarcomeric hypertrophy has a much longer half-life than sarcoplasmic adaptations.

Though exercise is, overall, a benefit to most, those with more advanced conditioning can actually encounter regression if a given training stimuli is contrary to specificity (i.e. a sprinter engaging in high-mileage training). Many of these advanced athletes, however, require high levels of function in conflicting components of fitness (i.e strength and endurance) . It's our job as coaches to accommodate those needs. Among the ways to address conflicting needs include prioritizing fitness components and/or addressing foundational qualities first. A periodization approach to prioritizing might take the form of focusing on neural-mediated strength-gains with athletes who already possess near-limit muscle mass. A foundational emphasis often takes the form of emphasizing maximal strength training as it usually results in the performance improvements of other fitness components.

So periodization is basically the planning of training in anticipation of varying needs and circumstances. With such needs and circumstances in mind, however, attention to how training sessions interact should be considered. Stimulus refreshment, adaptation half-lives, and adaptation conflict should be acknowledged in training schedule design. In efforts to plan training with such considerations, a fitness priority analysis and/or focus on foundational qualities is often desirable.